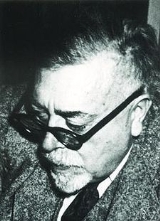 Quotations
Norbert Wiener was a U.S. mathematician, and a pioneer in the study of stochastic processes and noise especially in the field of electronic communication and control systems. He coined the term "cybernetics" in his book Cybernetics or Control and Communication in the Animal and the Machine (1948).

Cybernetics: or Control and Communication in the Animal and the Machine (1948)


The Human Use of Human Beings: Cybernetics and Society (1954)

Wiener's being both absent-minded and near-sighted has produced many famous anecdotes.