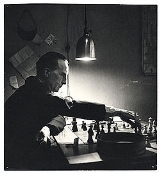 Quotations
Marcel Duchamp was a French artist who became an American citizen in 1955. His work and ideas had considerable influence on the development of post-World War Two Western art. His advice to modern art collectors helped shape the tastes of the Western art world.